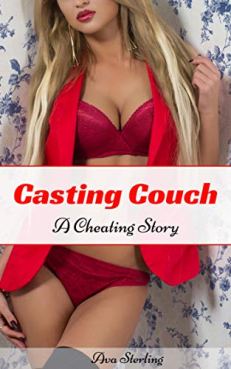 It’s out! My newest erotica eBook is available: Casting Couch: A Cheating Story.

It takes a lot to make it in the adult film industry. More than she realizes.

Cheryl needs a solution…badly. Her and her husband are behind on bills, anything from credit cards to their mortgage. He takes a second job to help chip away at the payments, but it’s not enough. She works as a secretary for a real estate company, but that’s not enough either.

The thought of working retail as a second job gives her hives. She worked as a cashier in the mall for years to get herself through college and she refuses to go back, even if she has to consider the unthinkable.

A month before she left college, she met a guy at a party. He made clips for the adult film industry and offered her a gig. Of course she refused, but something about it stuck in her mind. Probably the money part.

But now that she’s happily married, everything has changed, but the bills keep piling up. She might have to decide between financial security and losing her inhibitions.

If you enjoy steamy stories about cheating wives and getting caught up in the moment, you’ll love Casting Couch.

Cheryl crossed and uncrossed her legs for the third time since arriving in the tiny waiting room. Despite the small space, two couches lined two different walls. The place seemed to like having couches, and she had a pretty good idea why.

She turned the business card over in her hand. It wasn’t made very well to begin with, but over the years of being mashed up against other contents of the drawer it sat in, it had become bent and ultimately forgotten about. She pressed one of the edges against the tip of her finger until it started to bite into her skin. What am I doing here?

It wasn’t the first time she’d asked herself that. She fiddled with her wedding ring, something she often did when she was nervous. She told herself she didn’t have any reason to be nervous; she knew the guy, after all. But of course, she still was. Probably any woman there would be nervous, by default.

The door opened and a guy walked in. His T-shirt stretched over his chest in an impressive way. She averted her eyes like she usually did whenever an attractive man walked by–her strict Catholic upbringing and lectures about the sanctity of marriage, if nothing else–but she wasn’t dead either. She was aware how well-formed he was…how perfectly toned his biceps were and how they seemed to rip out of his sleeves. She adjusted her top to let in a bit more air, while convincing herself it was just because the room was warm.

“Hey,” he said as he passed her. The waiting room led into three offices, and he aimed for the one on the right. “Are you waiting for Myles?”

She started to reply and had to clear her throat when her voice didn’t make it through the first word. God, he was good looking. His blond hair was just long enough to fall onto his forehead a bit. Her husband always kept his hair short, one of his trademark looks, functional, but dull when it’s the same thing everyday.

He jabbed his thumb toward what she assumed was Myles’s office. “You want me to let him know you’re here? That way he can wrap up.”

He shook his head, shifting the hair that hung over his forehead. “It’s fine. He’s probably jerking off in there or something. I’ll let him know you’re here.”

She blinked. He was probably joking, but she supposed it was possible, given what sort of place it was. She might need to get used to that sort of talk. He knocked on Myles’s door and barely paused before opening it. If Myles was doing anything sexual in there, he wasn’t given any time to cover up.

“Hey, there’s a woman out here for an appointment at two. It’s for…” He looked back at her and waited.

She leaned forward in her chair. “To talk to Myles about the…videos.”

The man nodded. “…an audition.”

It struck her as odd he’d called it that. She was just there to talk to Myles about the idea of the whole thing.

“Great,” Myles’s voice said from inside the office. Even after all those years, he still sounded the same. “She’s early. You can tell her to hang tight and I’ll be with her in a few minutes. Thanks, Gavin.”

Gavin eased the door shut and turned back to her. “I’m sure you heard all that. He’ll be right with you.”