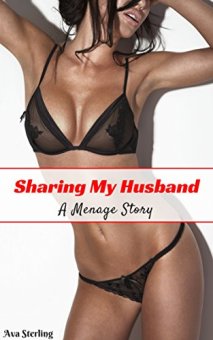 It’s out! My newest erotica eBook is available: Sharing My Husband: A Menage Story.

Throughout their ten years together, it’s been her husband’s fantasy to be with two women at once. What better way to give him his heart’s desire than invite her best friend into the bedroom? He’ll only turn thirty-five once, after all. It’ll be the night of his life.

Jillian starts out with the thought of mainly focusing on Matt alongside Delia, but as the scene unfolds, she can’t help but want to enjoy her too.

Last month, a menage wouldn’t have crossed any of their minds, but tonight is the beginning of something new for all of them. Jillian is determined to share her husband.

Sharing My Husband: A Menage Story

She smoothed her hands over her best friend’s hips, looking at their joint reflection in the mirror. The black fabric clinging to her friend’s body formed a plunging neckline, showing off her C-cups nicely.

“This is the perfect dress, Delia,” Jillian said, hands still roaming over Delia’s hips. “Matt’s going to love it.”

Hell, Jillian herself loved it. Reluctantly, she peeled her eyes away from Delia’s curves and saw to her own dress, caressing the metallic sapphire fabric that stopped midthigh. It was edgier than Delia’s dress, but most things about Jillian were. Delia was the opposite of her–taller, with long, sleek, dark hair, and her style was more elegant and sophisticated. She probably had been European royalty in a past life. Jillian, on the other hand, was a little bit shorter and sported a shoulder-length blunt cut. Together, they were timeless meets modern.

Matt had often wondered aloud how the two ladies were so close when they seemed such polar opposites. But college had brought them together, both finding a friendship through study groups and a love of Vietnam War protest music.

“Look who’s talking,” Deila said with a wink. “You’re stunning.” She reached out and twirled a tendril of Jillian’s beach wavy hair around her finger. “He’ll never know what hit him tonight.”

Jillian turned around, her stomach fluttering with nerves. She’d hate to ruin a friendship over this somehow. She needed to be positive this wasn’t a mistake. “Are you sure you’re okay with this? It won’t be weird or uncomfortable?”

“Are you kidding? This’ll be the most sex I’ve had in a while.” Delia chuckled. “I’m too busy with work, so something casual and no-strings attached is exactly what I need.” She leaned in close to the mirror and checked her lipstick, drawing the pad of her finger over her mauve-toned bottom lip. “I’m pent up beyond belief. And why lie, you know Matt is sexy as hell. It isn’t like this will be a chore.”

Jillian laughed, still admiring the other woman in the mirror. “You have a point there.” She sighed, and at the same time, her shoulders relaxed. There was no need to be worried; they were all adults and could handle this shift in their relationship.

“Did you see to dinner?” Delia asked, snapping the lid back on her lipstick.

Jillian shot her a look. “Do I look incompetent or something? Reservations are handled.” Teasing was one way the pair showed their affection.

“No, you look like a lioness.” Delia kissed her cheek, then gently rubbed off the bit of color left behind. “So, shall we?”

“Two ladies for the evening, I see,” Matt said, leaning in to kiss Jillian on the cheek. “Aren’t I a lucky man?” He took a seat at the table, lined with a crisp, cream cloth that went well with the sparkling crystal, gleaming silver, and fine china. The city’s premier hotel was always a spectacular place to dine. He wore a gray suit with a black button-up shirt, foregoing a tie. His tanned chest peeking over his top buttons tempted Jillian to wish dinner would go quickly.

6 thoughts on “New Release! Sharing My Husband: A Menage Story”