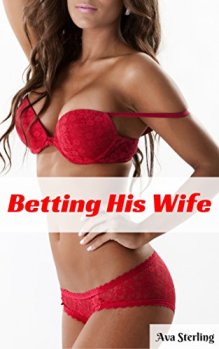 It’s out! My newest erotica eBook is available: Betting His Wife: A Swingers Story..

If you run out of chips, bet your wife.

Rachel and Charity’s bodies are used as currency by their husbands, all coming down to one last hand of poker. Taylor wins, but he decides to let Brett share in the spoils by giving over his wife too.

Up until this point, Rachel didn’t consider herself a swinger, but she’s willing to experiment. When it comes time to cash in, Rachel is becoming more and more intrigued by the idea of being the prize.

If you’ve ever wanted the ultimate wife swapping story, give this a read tonight.

Betting His Wife: A Swigers Story

Rachel bit her finger and slipped her other hand through her hair. She glanced at her husband and then to her best friend. Chills coursed through her body. She could hardly believe her own husband had bet her in a poker game, and even more in disbelief when his opponent did the same thing with his wife. It was something from the pages of history, alpha men treating their women like chips to be bartered and traded at their whim. Property.

She’d meant to say something. To yell at him. Slap him. Anything to make the embarrassment go away. He just smiled. She couldn’t decide if that made it worse or not. Leaning back, she tried to shrug it off. Surely, this was all a joke. He wouldn’t really go through with it.

But what surprised her was how much that notion warmed that sweet space between her thighs. Being with her best friend’s husband? Jesus. Rachel couldn’t deny having thought about it. Taylor was a gorgeous man. Tall with shaggy, dark hair. A beard that made her ache. The deepest, brown eyes she’d ever seen. And his body was thick, built. Charity had been spilling the goods about his cock for years, including the exact detail of his size.

He was different from Brett, her husband of fifteen years, who was clean cut, if still rather rugged. But Brett looked more like a rancher from her home state of Oklahoma, a sexy cowboy, than the edgy, biker vibe that Taylor had with his raspy voice.

And then there was Charity, her best friend. She was gorgeous. Slender, with an angular face. Long, black hair that shone almost purple in the sunlight. Her skin was a stunning shade of almond, a gift from her American Indian heritage. She could easily win a modeling contract, and many times Rachel had urged her to apply.

Her gaze slowly moved to her best friend’s husband, the man who’d just won her. For the rest of the night, she now belonged to him. And her best friend now belonged to the man she’d been married to for so many years. Taylor moved his cards, sliding them across the green, felted tabletop, no longer needing them. He only had eyes for Rachel now.

Brett patted his lap, beckoning his wife over. She lowered herself down onto him. “Are you sure you’re fine with this?” he asked as he wrapped an arm around her shoulders. “I mean, it’s only a game. But if you two,” he glanced at Charity, “are actually interested…” The corner of his mouth rose up in a grin.

Rachel chewed her lip and glanced at Charity. “What do you think?”

2 thoughts on “New Release! Betting His Wife: A Swingers Story”

Join 2,965 other subscribers
Follow What I Write on WordPress.com